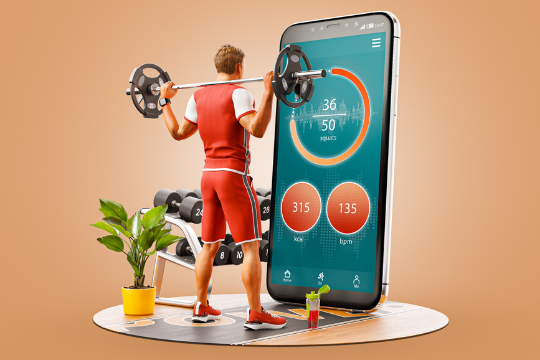 Fitness trackers and apps are a popular tool for fitness buffs, but can AI help the industry to evolve even more? Early research shows that it might. Below are five examples of artificial intelligence (AI) in fitness tracking devices and applications.

Smartphone apps that monitor daily activity can be helpful to people who are trying to get in shape. However, many of these popular fitness trackers and apps on the market today sometimes fail to accurately track physical activity.

Researchers at Boston University have developed an artificial intelligence algorithm that uses smartphone data from accelerometers and gyroscopes—devices that measure motion—to accurately map physical activity. The team led by Computer Science Professor James Wang is using the new algorithm to create a smartphone app called BU-Atlas that detects patterns in how we move and uses those movements as indicators of our activities throughout the day. “We would like to be able to use these data to understand how people are moving, in order to tell them, for example, that they should avoid traveling in certain ways or walking down particular streets,” says Wang. The BU-Atlas app contains an algorithm that can be used to monitor a person’s physical activity and how their movements change throughout the day.

“We don’t think it will totally replace fitness trackers,” says James Siminoff, a member of Wang’s BU team. “But we do believe it can provide valuable information to give people better insights about their health.”

2.    Using AI to Gain Personal Insights into Health and Risk for Disease

While many fitness trackers and apps use sensors to accurately monitor physical activity in the user, some researchers are using artificial intelligence technology to gain more personal insights into the person’s health and risk for diseases.

Specifically, a team of scientists from New York University (NYU) recently developed new machine learning algorithms that enables computers to interpret large volumes of medical data to predict cardiovascular risk. The scientists used data from more than 700,000 patients who were treated for cardiovascular disease (CVD), along with electronic health records from a national database of hospitalization records.

In addition, the researchers created artificial intelligence models that can detect and interpret patterns in patient medical history and hospitalization data to accurately predict CVD risk. “It’s exciting because our models show that artificial intelligence can be used to understand so much about a person from their electronic health record, even when it’s not related to the reason why they were hospitalized,” says Cardiologist and NYU School of Medicine Associate Professor Dr. Matei Zatreanu, who led the research team along with NYU School of Engineering Professor Dr. Yann LeCun.

Fitness guru Jillian Michaels recently worked with Alphabet’s health-tech subsidiary Verily to develop a new app called “Fit”. Built off of the deep learning tech developed by Google, Fit uses AI and machine learning to analyze data from wearable devices such as smartphones and smartwatches, in order to recommend personalized workout plans. The app is able to track physical activity, monitor heart rate, and map exercise routines. Fit will also track the user’s diet by using images of meals taken with their smartphone to identify ingredients. The app then provides personalized suggestions on healthy meal alternatives that can aid weight loss efforts.

In April 2021, Qualcomm announced that it is developing a virtual personal trainer based on artificial intelligence. The new AI Coach app will be able to monitor users’ heart rate, speed of movement, and other physical attributes while they are working out. This data is analyzed using machine learning so that the app can keep track of changes in the user’s fitness levels over time and offer suggestions for how to make improvements.

Researchers at the University of Maryland recently announced a new smartphone app that uses machine learning and deep-learning algorithms in order to measure symptoms related to Parkinson’s disease and predict the onset of seizures. The app uses an algorithm to monitor such data as heart rate, movement, and voice recordings to track the effectiveness of treatment for Parkinson’s disease. This new research proves that AI has a place in our everyday fitness apps and can be used to great effect in helping users improve their health.

Since these applications rely on data collected from wearable devices, it is important for consumers to be aware of how their data is being used and how it might be shared with third parties. For example, users of Microsoft’s DDx app need to grant the company permission to access their data from any wearable devices they are using. These apps also typically require medical records information on the user, so it is important to understand the privacy policies of these types of services before agreeing to use them.

These are just a few of the many examples of how AI is being used to develop new apps and products that can improve our lives as they make use of health and fitness data collected from wearable devices. Although it may seem unusual for AI to be used in this space, these technologies have rapidly evolved over recent years and now allow us to track our fitness stats and improve our health in a completely new way.

The potential for AI to transform healthcare is enormous so much so that it has captured the imagination of many people including Bill Gates, Mark Zuckerberg, Elon Musk, Steve Wozniak and many more. While there are skeptics out there who believe that AI won’t be able to solve health issues, there are others who are eagerly expecting the technology to completely change healthcare as we know it.