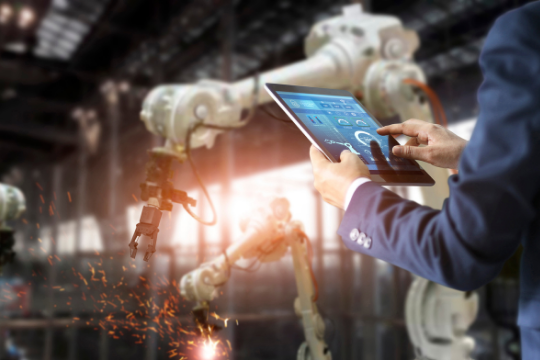 The evolution of the automobile has had a long course of development, from simple steam-powered vehicles to the modern sophisticated cars we have today. In the past four decades the industry grew exponentially, but it wasn’t until recently that more focus was put on technological advancements and software innovations thanks to big companies such as Google, Uber and Tesla entering the arena. And while the automotive industry has been slow to adopt new technology, it seems that there is finally a movement in the right direction with an influx of new ideas and technologies being projected on the horizon.

The automotive industry has, for the most part, been lagging behind in software development when compared to other industries. While the industry itself is one of the biggest producers of revenue (nearly $2.3 trillion) it seems that much like many other fields (Healthcare, Banking), it will be difficult for this industry to move towards automation and adopt new technologies without disrupting traditional business models. However, the industry is seeing a rise in software companies that are looking to bring about changes by focusing on three key areas:

The automotive industry is beginning to understand that it can no longer rely solely on hardware and changing production systems to bring about advancements. While there are still many complexities with regards to software engineering, the industry will begin to adopt new technologies at a faster rate as more traditional car manufacturers join forces with tech companies.

One example of this is Toyota’s investment in Uber’s autonomous driving division. This partnership falls under their new effort called “Toyota Engineering Services” where the car company aims to bring “advanced technologies into vehicles” through their new hub in Silicon Valley.

Another growing trend in the automotive industry is connectivity between cars and other devices (i.e. smartphones). As traditional car manufacturers bring about newer models, these will be equipped with software that makes it easier for customers to integrate their personal devices with the car. This connectivity between software and hardware is an important step that will help automakers navigate towards more advanced autonomous vehicles.

3. Car As A Service vs. Car Ownership

One of the biggest changes for this industry is the shift from traditional car ownership to using mobility as a service (MaaS). Services such as Lyft, Uber, and especially autonomous taxis are looking to change the landscape of car ownership.

While it will still be some time before MaaS becomes mainstream, there is immense opportunity for growth once a greater number of consumers start using this service. One of the biggest reasons for this is the fact that car companies will begin to make more revenue on services rather than products.

Thanks to these emerging trends, it’s clear that software will play a growing role in the automotive industry by helping traditional car manufacturers adopt new technologies while at the same time allowing them to explore opportunities outside of their traditional domain.

Not surprisingly, there is a huge number of opportunities in the automotive sector for software developers. Even though it might take some time for this industry to catch up with other sectors such as retail and financial services, here are some interesting trends to keep an eye out for:

As mentioned earlier, MaaS can be used to describe any platform that can be used for renting vehicles or transportation services. Some companies are beginning to explore the idea of making luxury vehicles available on demand (i.e Rolls-Royce, Mercedes-Benz).

The industry is changing with more cars becoming “connected” thanks to embedded software and hardware integration. Traditional car companies are increasingly partnering with tech companies to develop connected vehicles that can seamlessly connect with a user’s personal devices.

Given the vast amounts of data generated by connected cars, analytics will quickly become one of the more important aspects for these developers. From predicting when parts might fail to providing technical support during on-the-road situations, analytics will be an integral part of the software development process.

This has been one of the most talked about disruption trends within this sector. More traditional companies are moving towards fully autonomous driving technology, with Toyota’s investment in Uber’s self-driving division being one example of this shift.

Even though electric cars make up less than 1% of the entire vehicle market today, some technology companies (i.e. Tesla) and automakers (i.e. General Motors) are betting on this new technology to power their future fleets within the next few decades.

Software is becoming an ever more important part of the automotive industry. As self-driving cars, connected vehicles, and even electric vehicles become mainstream, software developers will be needed to build better experiences for drivers and passengers alike.