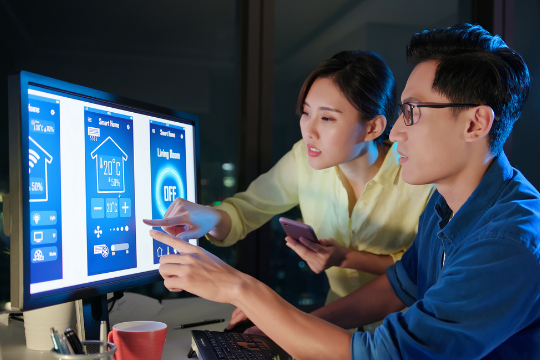 In the past, technology has always been about making our lives easier. The goal has always been to find ways to reduce the amount of time and effort we need to put in to get things done. In recent years, one area where this has become particularly apparent is user interface design or UX. With the advent of touchless UI technologies, such as voice assistants, chatbots, and gesture recognition devices, there are now multiple ways in which people can interact with their phones without ever touching them. This has opened up a whole new world of possibilities for how we go about completing daily tasks, such as sending messages, getting directions to places, or making phone calls.

What is Touchless User Interface?

A touchless user interface, also known as a natural user interface, is a term used to describe a system in which an individual interacts with a computer using only their voice or gestures. Whereas touch screens have been around for years and have become commonplace on smartphones and other mobile devices today, touchless interfaces are relatively new technology. They are the result of innovative companies such as Amazon and Google investing in natural language processing that allows their voice assistants, Alexa, and Google Assistant respectively, to understand what the user is asking.

How Touchless UI is Developed

There are currently two main ways of developing a touchless interface. The first is through the use of speech recognition software which allows users to operate their device by simply speaking commands or asking it questions. Amazon’s Alexa, for example, works using a natural language processor that uses machine learning and deep neural networks to understand what you’re saying and respond accordingly. The second way in which touchless UI is developed is through gesture control or motion detection technology that can be used from across the room. Microsoft Kinect was one of the first devices available commercially with this kind of capability, but of course now even smartphones incorporate similar technology allowing people to switch songs on Spotify, for instance, without ever touching their device.

There are several ways in which a touchless user interface can enhance the various elements of user experience.

One of the most obvious benefits of touchless UI is that it increases convenience and efficiency. With no need to physically touch your device, you can complete tasks quicker and with less effort. This is particularly useful for activities that require multiple steps, such as sending a text message or email.

Another way in which touchless UI enhances UX is through reduced distraction by design. This is because voice assistants like Alexa can give you verbal feedback about what they are doing, allowing users to complete other tasks at the same time without worrying that they might be missing something important on their device.

Voice recognition technology also comes with increased security and privacy as people don’t need to worry about unauthorized access to their devices. As long as the user doesn’t share it with anyone else, information stored or accessible via speech recognition software remains secure even if the phone falls into someone else’s hands. It has no fingerprint trail so there’s no way of identifying who the phone belongs to.

5. Easier Accessibility for All

Finally, touchless user interfaces also come with increased accessibility benefits as anyone can use them regardless of whether they have physical disabilities or not. Touch screens, after all, require users to be able to physically touch their device which is not always possible. As long as someone understands the basics behind how voice control software works, however, they can go on to complete any task that would normally require them to interact with a touch screen both easily and independently!

UI vs. UX Design: Importance of Both For App Success

User interface (UI) and user experience (UX) are two important aspects that determine the success or failure of an app. UI is all about how the app looks and how users interact with it, while UX is concerned with how users feel when using the app. To create a successful app, you need to focus on both UI and UX design equally.

Good UI design will make your app look visually appealing and easy to use, while good UX design will make sure your users enjoy using your app and find it helpful and useful. Focusing on just one or the other will not be enough – you need to create a well-rounded app that has both great UI and UX design to be successful.

A touchless user interface provides several benefits for users that go beyond just convenience and efficiency. Increased flexibility, reduced distraction, enhanced security and privacy, and easier accessibility is all benefits that touchless UI can bring to users. To create a successful app, it is important to focus on both UI and UX design equally. By doing so, you will create an app that looks great and is enjoyable and helpful to use!