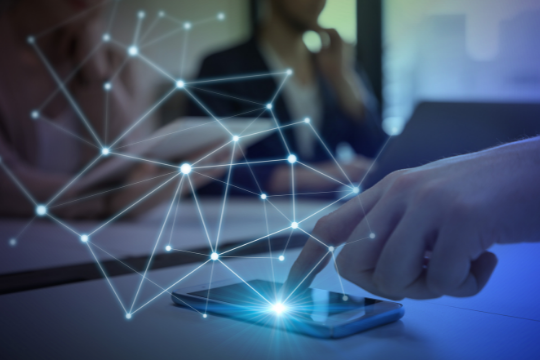 Ultra-wideband or UWB is a radio technology that operates in the 3.1 to 10.6 GHz frequency range, which transmits data packets in very short, low-duty cycle pulses. It was originally developed for military use but is now used in everything from computer peripherals to video games. It has the ability to transmit large amounts of data over short distances while avoiding interference with other wireless technology such as Bluetooth and WiFi. The technology can be used outdoors for high-speed links between satellites, or indoors where it competes with traditional RFID systems on price and performance.

UWB differs from conventional narrowband communication methods in that the bandwidth of the signal is much larger, and information is carried not only by the precise phase and amplitude of the carrier wave but also by its exact timing. Data rates can be high with a single UWB device.

The most common implementations of UWB are based on very short pulses, often modulated by either the amplitude or frequency of the carrier wave. Frequency modulation allows for better time synchronization which in turn increases the precision. Ultra-Wideband Technology (UWB) uses frequencies up to 10 GHz.

UWB is defined by the FCC in the United States, ETSI in Europe, and Japan’s ARIB. These specifications are similar in that they allow for use over the entire licensed UWB spectrum of 3.1 to 10.6 GHz, or in some bands shared with other applications (e.g., 2.3-2.7 GHz in the US). In many parts of the world, the 3.1 to 5.8 GHz band is shared with other service applications.

Ultra-wideband technology (UWB) has gained a significant amount of attention due to its ability to provide high bandwidth data connections over short distances. UWB appears capable of providing data rates exceeding 20Mbps with distances on the order of a meter or less. Bluetooth, by comparison, is limited to providing data rates of about 721kbps and coverage of no more than 10 meters.

How Different is Ultra Wideband from BlueTooth?

Bluetooth is a wireless technology standard for exchanging data over short distances from fixed and mobile devices using short-wavelength radio transmissions in the ISM band from 2.4 to 2.485 GHz), creating personal area networks (PANs) with high levels of security. Bluetooth is a more mature technology that has been around for more than a decade and currently supports an estimated 2.5 billion devices in use by consumers and businesses worldwide with almost two million new devices being added each day.

Compared to Bluetooth, UWB supports a wider range of bandwidths (5 – 500 MHz), faster speeds (up to 480 Mbps), and different frequency ranges. UWB, like Bluetooth, is designed primarily for point-to-point connections between two devices such as one computer peripheral directly connecting with another device or communicating with a cell phone or PDA which can then forward the information on to other computers in the network.

However, unlike Bluetooth, where both ends must be simultaneously activated by an initiating device such as a laptop before any communications can begin, UWB devices may be programmed to operate in a “sleep mode” and then activated at will by an initiating device that transmits encoded signals that wake up the target device. This means that it is possible for many UWB devices to share a common data channel and can reduce power consumption and latency (the time lag between requesting and receiving information) while maximizing throughput (amount of information transferred).

What Are the Advantages of UWB?

What Are the Disadvantages of UWB?

What Are the Applications of UWB?

Possible applications for UWB include:

The technology could also enable people to wear small computers on their wrists that gather information from sensors placed around workstations or within manufacturing plants and then beam the data back to a central computer for analysis.

Is 5G Ultra-Wideband Worth it?

For starters, it grants better control over the devices that connect and communicate with the network. For example, it is possible for a system administrator to identify and deactivate specific devices using built-in sensors such as microphones, cameras, and GPS receivers.

This would be useful in data centers and power plants where security is a concern or during events such as concerts where audience members should not be able to use their cell phones to capture video, text, or other information that could stream live on the Internet.

It also enables fast transmission speeds. The UWB connection between two devices would reduce latency (the delay in transmitting data) and maximize throughput (the amount of data that can be transmitted in a specific amount of time).

UWB also eliminates the need for multiple radios by using one chipset that supports both short-range personal area networks (PANs) and wireless local area networks (WLANs). It is possible to connect different devices and later deactivate and reactivate them when it is necessary to add or remove their functionality.

Which One Is Better for Indoor Positioning Technology?

When posing the Ultra-Wideband vs. Bluetooth debate, you find that both technologies have their own strengths and weaknesses, so it depends.

In short, UWB has a better range than Bluetooth, but Bluetooth has better connectivity. Bluetooth’s advantage is that devices can connect wirelessly without requiring line of sight, while the UWB connection can’t. Bluetooth can use existing infrastructure such as Ethernet cabling to provide Internet connectivity at a faster speed than Wi-Fi, while UWB requires a direct link between two devices to transmit data.

UWB’s key attributes are its speed and the ability to simultaneously serve multiple devices while avoiding other types of wireless traffic within the same spectrum. The potentially higher cost of device implementation may be offset by the possibility of less power consumption.

Bluetooth provides a better solution for low-bandwidth applications such as keyboards, mice, and speakers while UWB offers higher bandwidth for high-speed data transfers between devices. However USB 3.0 is already providing speeds comparable to UWB, making Bluetooth an even better choice for short-range wireless connections with its lower cost of implementation.

UWB has the potential to provide higher bandwidth for data exchange between stationary points such as desktop workstations but lacks the mobility of Bluetooth. Yet, its proposed high speed and low power consumption could be a major advantage in offering a single platform that could handle both short-range and longer-range wireless connectivity needs with flexibility and simplicity.

However, UWB alone does not provide an effective solution for indoor positioning systems. The technology may be used to enhance GPS services, making them faster and more accurate indoors, but combining UWB with other technologies can create location-aware applications that could potentially enable personal navigation devices to pinpoint our exact location within a building without the need for satellite-based communications.

Both of these technologies are promising new advancements that can lead to many of the things we’ve been dreaming about for years. Bluetooth will lead to low-cost, easily deployable systems capable of supporting everything from industrial process controls to home appliances. UWB will let us do even more with high bandwidth wireless connections but it’s possible that both technologies could be combined to create a more complete solution.