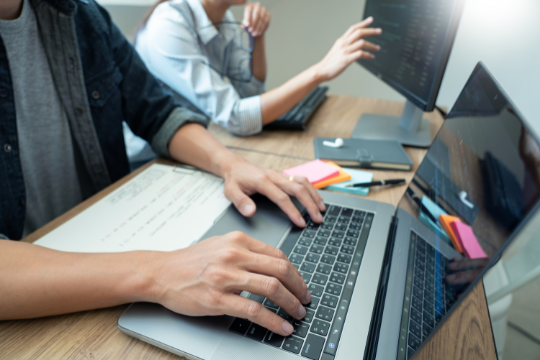 As the complexity of software grows, it’s becoming increasingly difficult to manage. Mobile apps are even more complicated; they must be small and lightweight enough to run on phones yet capable of running huge server-side codebases written in languages like Ruby or Java.

These languages often require large sets of dependencies that you have no control over, making it difficult to maintain a stable environment for your app. And as new developers join the project, their work must be blended together with everyone else’s as seamlessly as possible.

In order to keep up with all these demands, an automated process needs to be implemented to run every time a change is made by a developer. This process helps ensure that integration issues don’t arise and that the quality of your app doesn’t slip below an acceptable threshold.

Continuous integration vs continuous delivery is an ongoing discussion about the two processes facilitating constant improvement and stability for smart applications.

Continuous integration is the practice of regularly merging a developer’s work to a mainline, preferably several times a day. It helps developers streamline new integration changes and stay up-to-date with the latest adjustments in the trunk, enabling detection of any potential problems early on.

Continuous integration is great for agile teams developing mobile apps because it’s quick (developers commit their code frequently), it’s automated (no need to manually integrate branches), and it encourages collaboration between team members (because multiple developers can work on the same branch).

Meanwhile, continuous delivery is a software engineering approach in which teams produce software in short cycles, ensuring that it can be reliably released at any time. It’s about merging different processes with a faster and more frequent execution, making sure every change is always production-ready. Instead of hoping for a perfect implementation before releasing to production, continuous delivery allows you to release early and often.

How Do These Techniques Improve App Performance and Function?

Continuous integration and continuous delivery improve app performance and function by ensuring that your app is stable and dependable. Rather than worrying about integration issues, you can simply run your automated build process and be confident that everything will work as intended.

You’ll also improve the quality of your code by carrying out continuous integration and delivery since each new change is tested before it’s merged into the trunk or mainline. With every change tested, it’s less likely that you’ll end up with bugs in production.

Continuous delivery involves verifying that each new build is of high quality, performing automated testing, and validating that the build can be deployed successfully throughout your environments. Continuous delivery also monitors performance metrics to ensure that key indicators are within normal ranges.

Continuous integration helps you detect problems early on in the development process by making sure every small change doesn’t break larger systems. It makes it easy for developers to catch mistakes themselves instead of having to rely on others. It also uses automated unit tests, which are faster and less expensive than manual testing. These tests can be run after every commit or during nightly builds, ensuring that even if a mistake is introduced, the most recent working version is still functional.

The main challenge of implementing continuous integration and delivery is finding the right tools for your mobile app team. You need a process which can run smoothly on your server(s) without taking down your build machine, and you need something that your development team will be willing to use.

First, let’s look at a few tools out there that can help integrate these two processes on mobile apps, including:

Jenkins — This popular open-source tool supports iOS, Android, Windows Phone 8, Blackberry 10, Xamarin Test Cloud, Cordova/PhoneGap, and RhoMobile. It can be configured via a web UI or from a command line interface.

TeamCity — This tool is built by JetBrains, the makers of the popular Kotlin and IntelliJ IDEA cross-platform mobile app development environments. TeamCity integrates with Maven and Gradle, and there’s a plugin for Jenkins that makes it easy to set up an “iOS continuous integration server” which can deploy builds to Apple’s iTunes Connect and TestFlight.

Travis CI — This automated app building service supports iOS, Android, and other platforms without requiring your own build machine. It integrates with GitHub so you can automatically trigger builds when you push to your repository, and you can run your tests on Travis CI using the Sauce Labs cloud-based iOS and Android testing platform.

Now let’s look at some guidelines to follow when employing both processes:

Instead of running manual test suites at infrequent intervals, continuous integration means your team will always have an automated suite running.

When continuous integration is implemented correctly, there’s no need for the traditional “integration phase” that comes at the end of software development. Your team can simply push small snippets of code to the trunk whenever they’re done working on them instead of waiting until all features are complete before merging their work together.

Enforcing stricter discipline in your codebase

When everyone commits changes to the same branch frequently, you’ll definitely want to keep things consistent with your existing code so you don’t break anything! Having a robust test suite will allow developers to be confident enough in their changes that they won’t hesitate to commit their work. This way, only real problems or bugs will make it through your test suite, and your team can find and fix them before they affect users.

Your app will perform better when you use continuous delivery because changes are automatically deployed to production as soon as they pass all of your tests — no matter how small or large. The more frequent your deployments, the less time there is between a feature’s completion and it being used by real users — which means any problems with that new feature will be addressed faster.

Additionally, if one change, in particular, causes an issue on the live site, only that specific version needs to be rolled back instead of reverting back to a previous version that might have been known to cause problems in the past. Continuous delivery also makes post-launch debugging processes much easier since developers know for certain which change caused the issue.

Continuous delivery allows you to stay informed about what your users are experiencing. This can help you identify and solve issues faster, making for a better user experience, which builds trust with your customer base. It can also reveal new areas of improvement that might have been overlooked during pre-launch testing phases — this is especially helpful if you’re developing an app from scratch as opposed to building on top of an existing app’s codebase, where discrepancies in data schema might be more difficult to detect. If something does go wrong, you’ll easily be able to pinpoint the exact version responsible since you always roll out specific versions instead of pushing untested changes en masse.

From there, you’ll need to connect your android codebase with a specific ios or android server — refer to the official documentation for more details on how this process works.

Once your build target is connected, you’ll be able to access a number of different reports from within Android Studio by going to “View > Test reports” from the menu bar. The most important of these reports will include anything that failed unit tests.

Continuous delivery performance testing evaluates your most recent build with an infrastructure that is representative of your production infrastructure. Performance testing also helps you determine if there are any bottlenecks in your continuous delivery pipeline and gives you a chance to spend time fixing them before problems arise when large numbers of users access your application from different geographic locations or with various network connections.

This performance testing process can be automated by using tools like Jenkins or ART, which have plugins for various open source frameworks that enable you to configure performance tests.

An important part of the process is to decide on performance metrics that will help you determine if there is a bottleneck and also to decide if changes need to be made. Some of the most popular metrics include:

Time to first byte response time: This is the total time elapsed from when a client requests for your application to send out data. It is measured using log files on the server that have timestamps and gauges how fast your page is taking to load. The lower this number is, the better it is for your application.

The need for speed: It is really important to keep track of the critical metrics in your continuous delivery pipeline because they indicate the performance of your application. The higher these metrics are, the happier your users will be because they get a great user experience with faster load times for your app. It is also important to make sure that these numbers are low because it means fewer resources will be needed on your servers and you can scale efficiently.

You also have to be prepared for any failures that may arise during testing. It is important to have error handling features in place where necessary to ensure that your users are not redirected to error pages, thereby losing their session.

Measuring these performance metrics because it helps you track trends and fix any issues before they arise so your application can scale well as the number of users on your app increases. You find out if any changes need to be made because it directly impacts your users and helps maintain a great user experience.

With proper performance monitoring in place, you can react to changes with ease and ensure that your deployment is always ready for production. You also get to make better decisions because you will be able to see the impact of any changes that you make to your application firsthand.

Continuous integration and delivery are therefore essential to your app because they help ensure that your application is always ready for production and can scale well. They make it easier to deploy applications and prepare for any changes arising during performance testing because you will have error handling in place where necessary. Continuous integration and continuous delivery essentially improve app performance and empower you with the tools necessary to ensure a great user experience for your customers, which is ultimately the end goal of app development.